Global stock markets were volatile again in the reporting year of 2016. In particular, the weak economic data of world’s largest economy, China, and development of oil prices caused the SBF120 to fall to its annual low of 3,084 points initially in February. Yet despite the British referendum on ending E.U. membership as well as the U.S. presidential elections, the continued expansive fiscal policy of the ECB enabled stock markets to recover substantially. On balance, the SBF120 reached an annual high of 3,836 points as of December 31, 2016, recording a gain of 4.7% in 2016. Following significantly above-average development over the past years, the NASDAQ Biotechnology Index fell 21.7%, which was attributed primarily to the discussion held on medical drug prices during the U.S. presidency election campaign.

As a result of the significant three-digit level our share price, the Annual Shareholder’s Meeting decided on April 5, 2016, to split by 6 the par value of each of the company's shares. As a result, shareholders received 6 shares in exchange for each share held in. The reduction in the share price aims at increasing the tradability of Sartorius Stedim Biotech shares.

As the stock markets on the whole, the Sartorius Stedim Biotech share price showed a volatile development during the reporting period. After the price of the share had more than doubled in the previous year, it rose in the reporting year by 1.8% from €58.90 to 59.97€. 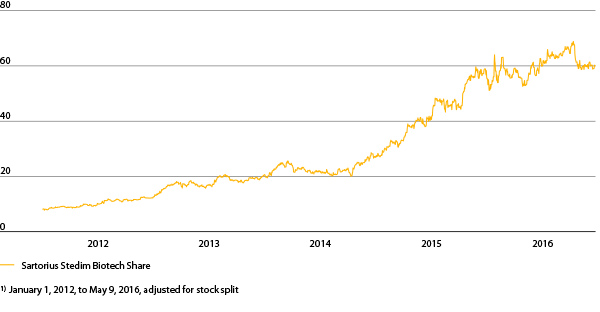 Besides providing first-half and annual reports as well as holding quarterly telephone conferences, we also regularly published press releases presenting the company business developments and other material events in the reporting year of 2016. Moreover, our management team was available to capital market participants on a regular basis at our sites in Goettingen and in Aubagne as well as at conferences and road shows for one-on-one meetings in international financial market centers such as London, Paris, Frankfurt am Main or New York. During the year under review, the communication focused in particular on explaining the update of our 2020 financial targets, current operating developments as well as the portfolio expansion following the acquisition of kSep.

All information and publications relating to our company and its shares may be found on our website at www.sartorius-stedim.com.

The recommendations of financial analysts serve as an important foundation for the decisions of private and institutional investors when investing in shares. Currently, six institutions regularly prepare reports and updates on Sartorius Stedim Biotech shares.

3) For 2016, amounts suggested by the Board of Directors and subject to approval by the Annual General Shareholders' Meeting

4) Based on the underlying net result

Sartorius Stedim Biotech strives to enable its shareholders to participate adequately in the company’s success and has continuously increased its dividend in recent years. In line with this objective, we basically follow the policy of paying out a relatively stable share of relevant net profit to our shareholders.

As a consequence of the stock split and the increase of the individual par value of the company's shares, Stedim Biotech S.A.’s issued capital amounted to €18.4 million as of December 31, 2016, and was divided into 92,180,190 shares, each with a calculated par value of €0.20. As some of the shares convey double voting rights, there were a total of 162,041,944 voting rights as of the reporting date.